I believe it was Alec Baldwin’s character in the movie Glengarry Glen Ross who said: “Always be launching new features.” Our tech team has taken this advice to heart here at nDash.

And with that, we’re excited to let you know about a couple new features, as well as a glimpse of what’s to come in the near future. Let’s take a closer look…

For Writers: Refer by Email

In one of our recent stats meetings, we discovered that 44% of all our new customers in 2021 have come via referrals from our writer community. Given that we credit writers with a lifetime royalty when someone signs up with their profile URL or referral code, it’s not all that surprising. Still, we wanted to make it easier for writers to earn passive income by referring their friends and colleagues, so we gave them the ability to invite them via email.

In the Referrals section of the platform — where you can see who you’ve referred and cash out your rewards — you’ll also now see a button to invite via email.

Once you click this and enter your contact’s email, they’ll be sent a message that looks like this: If and when they sign up, you’ll be credited with the referral and earn a % of their spending on nDash for the rest of your days.

Give it a try!

nDash is more than just a freelance platform; it’s also a tool for brands large and small to organize content production with their in-house teams. So if you’re list most modern marketing teams, that means you have a lot in the works at any given time. Some assignments are completed, some past due, some are still in draft mode. You get the idea.

To make it easier for brands to visualize this flow, we consolidated all the assignment tabs into one list. Whereas before you would have “Un-Assigned”, “In-Progress” and “Completed” separated by tabs, they are now all in one list, which you can collapse and expand as you see fit. A few minor changes on the states and statuses of each:

We hope this small change makes a big difference when it comes to organizing your content pipeline.

A quick glimpse on a few features that’ll be deployed very soon:

Have a feature you’d like to request? Hit us up on LinkedIn. 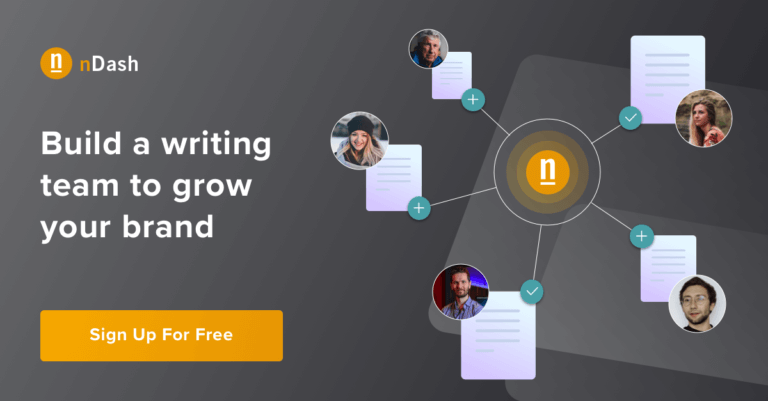 Photo by Markus Winkler on Unsplash